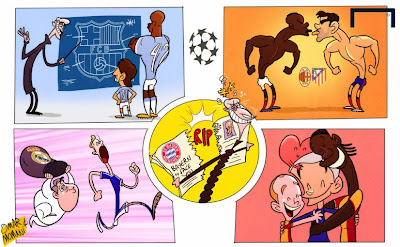 The draw for the last 16 of the Champions League was completed on Monday, with some intriguing fixtures emerging to create a number of storylines.

Didier Drogba will get his return to Chelsea and what is sure to be an emotional reunion with Jose Mourinho, after the Blues were drawn with Turkish side Galatasaray.

Manchester City boss Manuel Pellegrini will be hoping to draw upon all his knowledge of La Liga for the clashes with Barcelona, while Arsene Wenger's Arsenal were arguably handed the toughest tie of them all after they were paired with holders Bayern Munich.
Tuesday, 17 December 2013 09:45
Tweet Follow @omomani
Diposting oleh Dapur Meta di 02.48