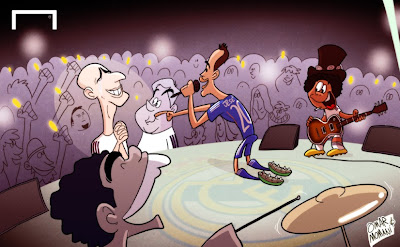 Jese Rodriguez claims he was "fulfilling a dream" after he scored a late winner in Real Madrid's 3-2 win over Valencia on Sunday.

Carlo Ancelotti's side had taken the lead twice through Angel Di Maria and Cristiano Ronaldo, only to be pegged back on each occasion by Pablo Piatti and Jeremy Mathieu.

But as the match at the Mestalla looked to be heading for a stalemate, Jese popped up with a goal which has kept Madrid five points behind La Liga leaders Barcelona.

“I was looking for Zidane in the celebrations as his support is a big influence for me," Jese explained after the match. "He and the coach give me a lot of love and Zidane is a big reason why I stayed at the club.”
Monday, December 23, 2013 12:00
Tweet Follow @omomani
Diposting oleh Dapur Meta di 06.24