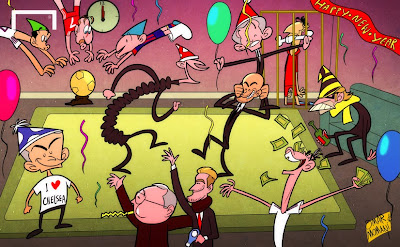 It's the end of the calendar year and spirits are in the sky... footballers and managers across the world have much to reflect on - and look forward to - as we head into 2014.

It's been a great year for Pep Guardiola, who took over from Jupp Heynckes at the helm of treble winners Bayern Munich, while Cristiano Ronaldo, Lionel Messi and Franck Ribery fight it out for the Balon d'Or. Gareth Bale got his big-money move to Real Madrid, though it's time for Sir Alex Ferguson and David Beckham to leavethe party.

Jurgen Klopp is left to drown his sorrows after losing the Champions League final and dropping out of the Bundesliga title race, Jose Mourinho is back with Chelsea, Arsene Wenger is top of the pile and Luis Suarez is in and out of the dog house.