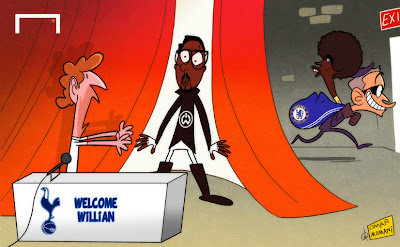 Tottenham looked certain to sign Willian from Anzhi this week, as the Brazilian flew to London for a medical in north London.But Spurs appear to have been trumped at the last moment, when Chelsea and Jose Mourinho swooped in for the forward, capturing him from right under their rivals' noses."He’s an extra target [to Rooney]," Mourinho told reporters when asked about the deal. "We have to do a medical."I am happy with my squad but every one of us says we are happy. We always want something more and never close the door."With Gareth Bale looking increasingly likely to join Real Madrid, Tottenham are once again forced to look for an alternative.
Tweet Follow @omomani