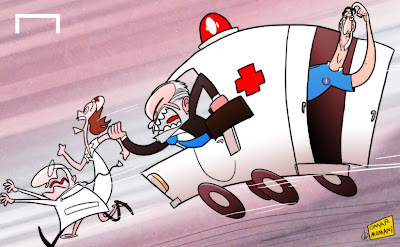 Calling all ambulance drivers - watch your back, Napoli owner Aurelio De Laurentiis is on the loose!The Partenopei chief is demanding a whopping £86 million in compensation after star striker Gonzalo Higuain suffered cuts to his face after diving from a hired boat and landing on submerged rocks.De Laurentiis was far from pleased with the medical attention received by the Argentina international but, despite potentially having enough spare cash to buy Gareth Bale, he plans to donate the money to charity.
Tweet Follow @omomani
Diposting oleh Dapur Meta di 09.32