Ribery stacks up the silverware in bid for Ballon d'Or 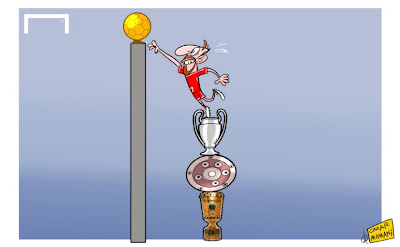 Can anyone stop Lionel Messi from steamrolling his way to a fourth consecutive Ballon d'Or title? Well a certain French winger thinks he can...

Bayern Munich star Franck Ribery made his announcement in no uncertain terms on Saturday, insisting that it is he who should be crowned the best player in the world.

"I think I've done everything to be the world's best player," he told the Bundesliga's official website.

"I've played a very, very good season. It's either now or never for winning this prize. I can't play any better than this."

So with the titles stacked up, including a Champions League and Bundesliga title, as well as a DFB-Pokal triumph, is the Ballon d'Or within Ribery's grasp?
Tweet Follow @omomani
Diposting oleh Dapur Meta di 21.04