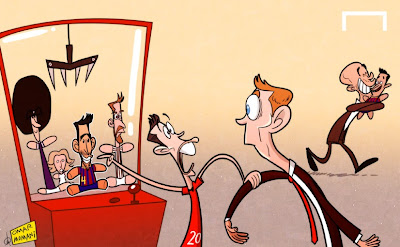 After spending much of the summer chasing unsettled Barcelona starlet Thiago only to be trumped by Bayern Munich and Pep Guardiola's sudden charm offensive, Manchester United need a transfer rethink.

A midfield playmaker remains a priority and Cesc Fabregas, Thiago's former team-mate at Camp Nou and another long-term United target, has risen to the top of the wanted list.

Barcelona are currently considering a £25.9 million bid from the Red Devils and, while it is unlikely to be accepted, it surely signals just the start of David Moyes' formal pursuit of the disillusioned Catalan.

There are, however, numerous obstacles to a deal. The Spanish champions are unlikely to simply jettison a player they fought so hard to prise from Arsenal, while the Gunners enjoy first option on any move.