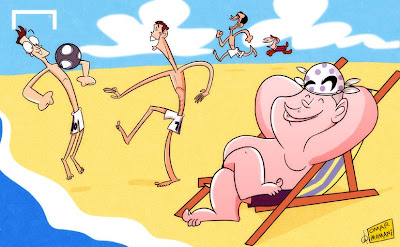 Real Madrid began their pre-season in convincing fashion on Sunday, roundly beating Championship side Bournemouth 6-0 down on the south coast in front of a packed Dean Court.

With it also marking the beginning of Carlo Ancelotti's reign as boss, the Liga side ensured their marquee names were on show and none other than Cristiano Ronaldo grabbed a double in the romp.

Bournemouth erected a temporary stand just for the occasion, allowing as many as 12,000 people to lap up the atmosphere and bask in the aura of the galacticos.
Tweet Follow @omomani
Diposting oleh Dapur Meta di 05.32