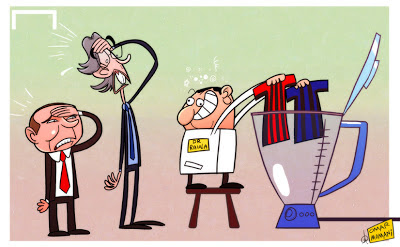 The summer transfer window is prone to wild speculation but this week has also seen one of the most ludicrous proposals in football.

Mino Raiola, the agent who represents Mario Balotelli and Zlatan Ibrahimovic among others, believes that AC Milan and Inter should merge in order to become a dominant force in Europe.

“The situation Italian football finds itself in is difficult,” he told Gazzetta.it.

“Milan and Inter, instead of competing against one and other, they should join forces.

“Lazio and Roma could have one strong club, rather than only two weak ones.”
Tweet Follow @omomani
Diposting oleh Dapur Meta di 16.59