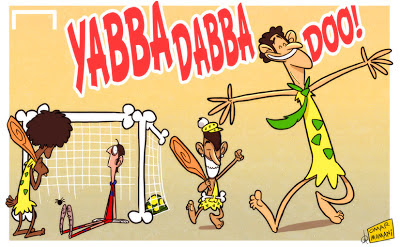 Brazil made it three wins out of three at the Confederations Cup on Saturday night, seeing off Italy 4-2 to finish top of Group A.

Having already beaten Japan and Mexico, Luiz Felipe Scolari’s men kept their perfect record intact with a victory that should see them avoid Spain in the semi-finals.

Neymar has been the star for the hosts so far and once again got on the scoresheet with a superb free kick after Dante had opening the scoring.

However, it was Fred with a real show of strength who grabbed the headlines, scoring twice in the second half to send the hosts into the last four.
Tweet Follow @omomani
Diposting oleh Dapur Meta di 18.10