Spain penalty prowess too much for Italy 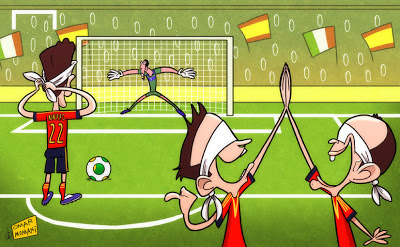 Spain booked their place in the Confederations Cup final on Thursday with a penalty shoot-out victory over Italy.

Cesare Prandelli's side battled the world and European champions for 120 minutes but neither side could break the deadlock.

But Spain's superstars proved to be as accurate from the spot as they are with their passes, as Xavi, Andres Iniesta, Gerard Pique, Sergio Ramos, Juan Mata and Sergio Busquets all netted.

Italy matched their opposition for quality every step of the way, until Leonardo Bonucci fired over the bar, leaving Jesus Navas to calmly slot past Gianluigi Buffon to book a final clash with Brazil on Sunday.
Tweet Follow @omomani
Diposting oleh Dapur Meta di 03.49