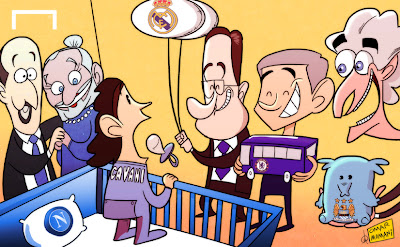 Edinson Cavani is a transfer target for some of Europe's biggest clubs this summer, but Napoli president Aurelio De Laurentiis is not convinced the striker should leave the club.

Real Madrid, Chelsea and Manchester City all want the Uruguay international, though none of the interested parties are yet to activate his £53.7 million release clause.

And De Laurentiis has warned the 26-year-old against leaving Napoli for a club where he may not take centre stage.

"Napoli is a true cradle for Cavani, allowing his inner child to express himself and fulfill his potential," De Laurentiis said at a press conference.

"He knows that he is the star of the show here at Napoli and you never know whether this will also be the case at Real Madrid or anywhere else.

"We have already seen how [Diego] Forlan and [Luis] Suarez have outshone him for Uruguay and how this has affected his goalscoring record.

"I have little doubt that he will take all of this into consideration before making a decision. He will make a decision on his future and we will follow his direction."
Tweet Follow @omomani
Diposting oleh Dapur Meta di 02.53