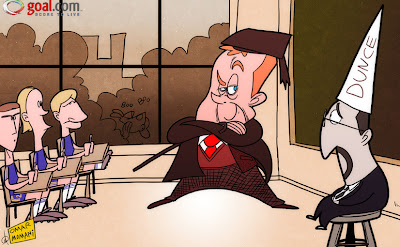 Down, out and languishing at the foot of the Premier League table, Harry Redknapp's QPR seemed all but relegated going into Wednesday's clash with Chelsea.
Prior to kick-off, the former Tottenham boss had teased his counterpart Rafa Benitez, insisting he would have to be "a dope" not to succeed with the talent-laden squad available to him at Stamford Bridge.

Whether Redknapp's jibes were intended or not, they most certainly worked, with the Rs snatching a shock 1-0 win against their west London rivals, and Benitez well and truly taught a lesson by 'Arry...
Tweet Follow @omomani
Diposting oleh Dapur Meta di 04.56