Chelsea boo-boys call for Torres to get the chop 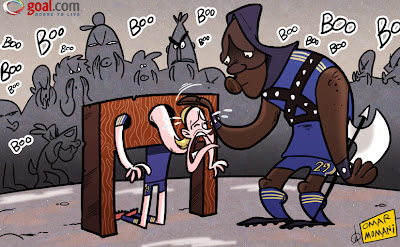 Chelsea's Capital One Cup defeat to Swansea brought misery for the fans and also for striker Fernando Torres, who once again failed to score before being substituted.

The Spain international has endured a terrible time in west London since his £50 million move from Liverpool, and was jeered on Wednesday night at Stamford Bridge by his own fans.

To make matters worse, the supporters also called for new signing Demba Ba, who looked a real threat in his brief cameo and could be set to ensure Torres gets the chop from Chelsea's team.
Tweet Follow @omomani
Diposting oleh Dapur Meta di 19.23