Wenger on thin ice after Arsenal defeat to Bradford 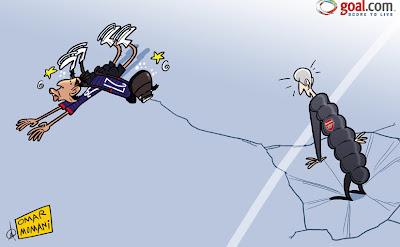 Ahead of Arsenal's trip to Bradford City in the Capital One Cup, the oft-derided tournament was starting look like the Gunners' best chance of ending their long wait for a trophy.

Indeed on paper, Arsene Wenger's side looked to have the pick of the ties having being drawn to face the League Two side in the quarter-finals of the competition.

The Frenchman even picked a strong team for the match, yet that did not matter to Bradford. The League Two side almost won the game in 90 minutes, before Thomas Vermaelen popped up with a late equaliser to take the game to extra-time

However, Bradford were not to be denied and took the Gunners all the way to penalties before beating them in the shoot-out to dump them out of the competition and leave under-pressure Wenger on thin ice at Arsenal.
Tweet Follow @omomani
Diposting oleh Dapur Meta di 08.41