Fear of Falcao keeps Mourinho up all night 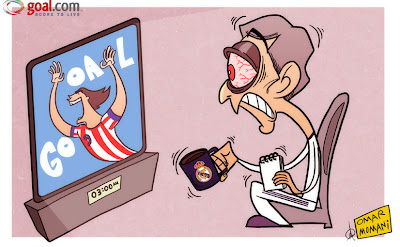 This weekend, the Santiago Bernabeu plays host to one of the most hotly-anticipated Madrid derbies in years, with Jose Mourinho's struggling Real taking on Diego Simeone's in-form Atletico.
The fixture has traditionally been something of a mismatch, with Real invariably enjoying comfortable victories over a succession of talented but underachieving Atletico sides.

This season, however, the tables appear to have turned. Real lie eight points behind their Madrid rivals, having already tasted defeat three times this season.

Atletico, however, have established themselves as Barcelona's closest La Liga challengers, inspired by their prolific Colombian striker Falcao, who has already netted 11 times in the league this season.

Mourinho is a known admirer of Atleti's irrepressible No9, labelling him "forbidden fruit" earlier in the campaign, and it is Falcao who will surely have been keeping an anxious Special One awake this week.
Tweet Follow @omomani
Diposting oleh Dapur Meta di 10.11