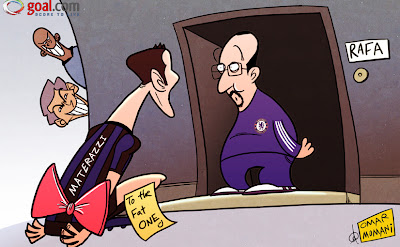 Rafael Benitez takes charge of Chelsea for the first time on Sunday against Manchester City at Stamford Bridge.

And while Fernando Torres might be pleased to see his old Liverpool boss, others who have played under the Spaniard do not remember him quite so fondly.

"Your friend Benitez is going to Chelsea," the Brazilian said to Mourinho, according to La Sexta.

The 49-year-old responded: "The fat one? Well then Materazzi should be his assistant."
Tweet Follow @omomani
Diposting oleh Dapur Meta di 05.39