A convenient truth? Ronaldo, Rooney & RVP out of friendlies 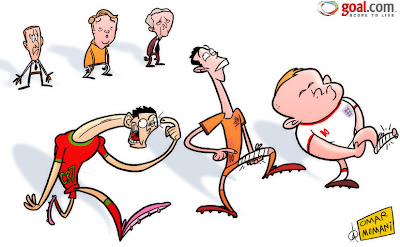 Another raft of international friendlies are upon us and, with them, a whole host of convenient injuries to some of Europe's biggest stars.

Cristiano Ronaldo has pulled out of Portugal's clash with Gabon on Wednesday due to a badly gashed eye sustained against Levante this weekend.

Manchester United duo Wayne Rooney and Robin van Persie, meanwhile, have also withdrawn from duty with England and the Netherlands, despite both featuring heavily in the Red Devils' comeback victory over Aston Villa on Saturday.

Of course, no one would be cynical enough to suggest that 'knocks' like these were crudely manufactured by club managers to buy their key men some crucial rest time, but no one can deny that the absence of their best players is a constant source of frustration to national team bosses.
Tweet Follow @omomani
Diposting oleh Dapur Meta di 06.31