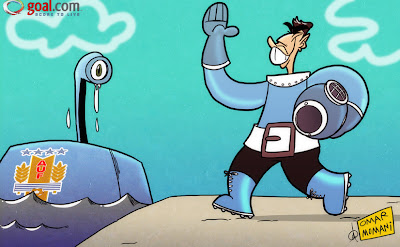 Luis Suarez has proven no stranger to controversy during his spell in England, and the Liverpool striker once again finds himself centre stage of the latest scandal sweeping the Premier League - diving.

The Uruguayan was vilified by Stoke City boss Tony Pulis after throwing himself to the floor in an attempt to win a penalty in the 0-0 draw at Anfield on Sunday.

And with Fifa vice-president Jim Boyce also calling for the 25-year-old to be punished, Suarez looks to have departed for international duty with Uruguay just in time to avoid the backlash...
Tweet Follow @omomani
Diposting oleh Dapur Meta di 07.58