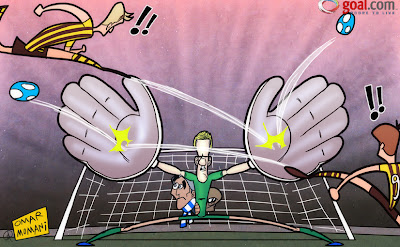 Manchester City had Joe Hart to thank on Wednesday as the England goalkeeper produced a superb performance in the Champions League against Borussia Dortmund.

The City shot-stopper was in top form at the Etihad making several sensational saves as the German champions took the lead through Marco Reus and threatened to add many more in a dominant second-half showing.

Ultimately it was Mario Balotelli who showed nerves of steel to net a late, late penalty and salvage a draw for the Premier League champions, but there was no denying that the real hero was City's No.1.
Tweet Follow @omomani
Diposting oleh Dapur Meta di 08.47