TEVEZ GOES FROM SINNER TO SAINT 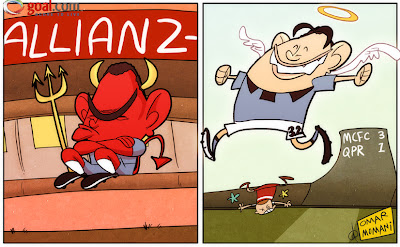 Carlos Tevez's strike during Manchester City's 3-1 win over QPR on Saturday completed a remarkable comeback for the Argentine striker.
Just 11 months ago the 28-year-old began a season long spat with Roberto Mancini, refusing to come off the bench during a Champions League defeat to Bayern Munich before exiling himself to his native Argentina.

However, the former Manchester United man came back into the squad towards the end of last year's title winning campaign and now appears to have walked the long road to redemption with the club's fans.
Tweet Follow @omomani
Diposting oleh Dapur Meta di 03.29