Rooted to the Emirates, Wenger's set to prolong Arsenal stay 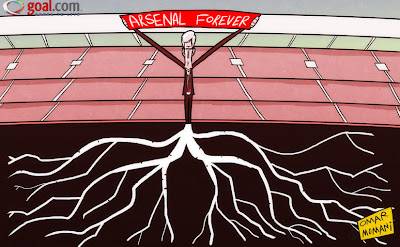 Robin van Persie, Alex Song and Cesc Fabregas may have all left the Emirates in recent seasons, but one man who has no intention of leaving Arsenal is Arsene Wenger.

Gunners chief executive Ivan Gazidis revealed the club's intention to offer the French boss a new deal on Thursday, with Wenger already racking up a 16-year stay in north London.

While the 62-year-old admitted he will not rush into signing a new deal, he has already laid his cards on the table, insisting he is an "Arsenal man"...
Tweet Follow @omomani
Diposting oleh Dapur Meta di 08.53