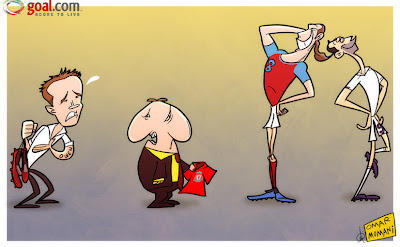 After Liverpool's 2-0 defeat to Arsenal on Sunday, Brendan Rodgers was left red-faced over the lack of striker options at Anfield.
The Liverpool boss conceded he wouldn't have let Andy Carroll leave on loan had he of known that no replacement would enter his squad. While on Monday, the club's principal owner, John W. Henry, released an open letter which claimed he would not pay over the odds for players.

With Michael Owen still without a club after being released by Manchester United in the summer, Rodgers may be left with no alternative now the transfer window has slammed shut.
Tweet Follow @omomani
Diposting oleh Dapur Meta di 09.30