No glove lost between Friedel and Barthez 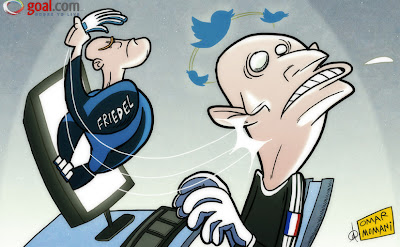 Brad Friedel took to Twitter on Friday to defend himself against comments made by Fabien Barthez regarding new Tottenham signing Hugo Lloris.

"He [Lloris] is faster than Friedel, he jumps higher, and he is very strong mentally," the former Manchester United man said. "What is happening now is incomprehensible, but I am not concerned. He will become the centre-piece for the club."

Exasperated by the former France shot-stopper, the American launched a counterattack on the social networking site.

"Just saw Barthez comments," Friedel wrote. "I normally don't comment on such crap, but when disrespected by someone I don't respect I must.

"Barthez was ignorant, disrespectful and out of order to mention my name."
Tweet Follow @omomani
Diposting oleh Dapur Meta di 17.42