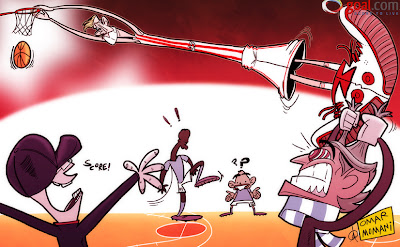 Stoke City secured an unexpected point at home to Premier League champions Manchester City on Saturday, thanks in part to their opening goal, courtesy of Peter Crouch.
The former England international got more than a little lucky not to see his effort disallowed, however, as multiple apparent handballs in the build-up set City fuming.

Manager Roberto Mancini complained after the game about watching "the NBA, not football", but there was nothing that he could do. Perhaps a time-out might be in order...