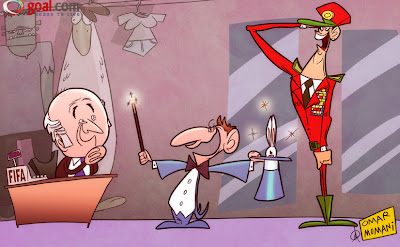 Fifa president Sepp Blatter believes both Lionel Messi and Cristiano Ronaldo are "living legends" in the world of football.

The 76-year-old feels the two players are different on the pitch but thinks they possess rare quality, and he believes the Real Madrid man dominates the game while the Barcelona star lights up matches with moments of pure magic.

"Messi or Cristiano Ronaldo? Both! They are different but both fantastic for football," Blatter was quoted as saying by Marca.

"Cristiano wants to be the general on the pitch, lay down the law and scream here I stand. Messi, on the other hand, is like a conjurer, a magician. They are both living legends of football."
Tweet Follow @omomani
Diposting oleh Dapur Meta di 08.07