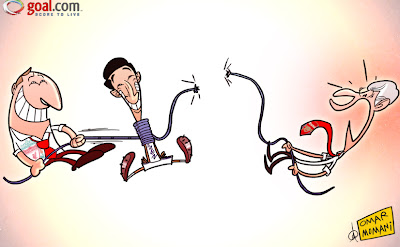 Liverpool have beaten Arsenal in their tug of war for Real Madrid midfielder Nuri Sahin.
The Turkish 23-year-old looked at one point to be heading to the Emirates Stadium, but Brendan Rodgers pushed (or pulled, in this instance) for the deal harder, and a season-long loan is Anfield's reward!

Can you see Sahin thriving under Rodgers' tutelage? Or do you think the former Borussia Dortmund star will rue not choosing Arsene Wenger's squad as his temporary team-mates?
Tweet Follow @omomani
Diposting oleh Dapur Meta di 08.53