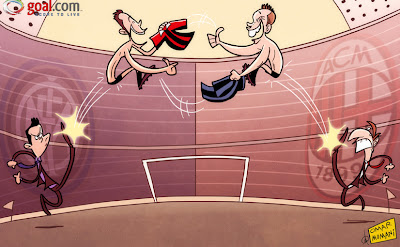 AC Milan and Inter put their rivalry aside on Wednesday, as Antonio Cassano and Giampaolo Pazzini were involved in a San Siro swap deal.
Pazzini leaves Inter having failed to replicate his prolific form at Sampdoria, while the controversial Cassano says he has found his smile again upon joining Andrea Stramaccioni's side.

With the clubs being in the same city and sharing a stadium, neither player will have to travel too far after being booted out the exit door.
Tweet Follow @omomani
Diposting oleh Dapur Meta di 08.36