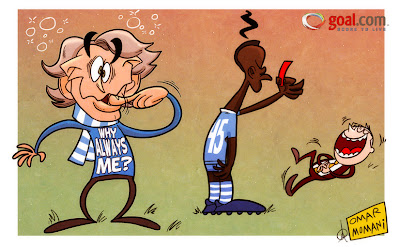 Roberto Mancini was left asking: 'Why always me?' on Sunday, as his Manchester City side lost 1-0 at Arsenal to leave them eight points behind Manchester United in the race for the Premier League title.
A late Mikel Arteta goal sealed the three points for the Gunners, but it was the antics of Mario Balotelli that really grabbed the headlines after the Italian was sent off for two bookable offences, and was his usual petulant self throughout the game.

Having just dealt with the Carlos Tevez saga, Mancini must be wondering why he has to keep babysitting his players while fighting Sir Alex Ferguson for the Premier League crown.
Tweet Follow @omomani
Diposting oleh Dapur Meta di 10.40