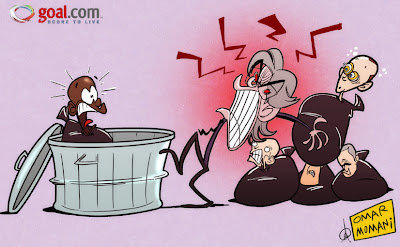 Inter president Massimo Moratti may have dismissed suggestions that coach Claudio Ranieri will be sacked after the club's Champions League exit at the hands of Olympique de Marseille on Tuesday night, but the oil tycoon also conceded that he is considering overhauling his ageing, declining squad in the summer transfer market.
Senior players such as Maicon, Julio Cesar, Esteban Cambiasso and Wesley Sneijder have cause for concern with the Nerazzurri also out of the Coppa Italia, and needing a miracle to qualify for next season's Champions League.
Tweet Follow @omomani
Diposting oleh Dapur Meta di 01.43